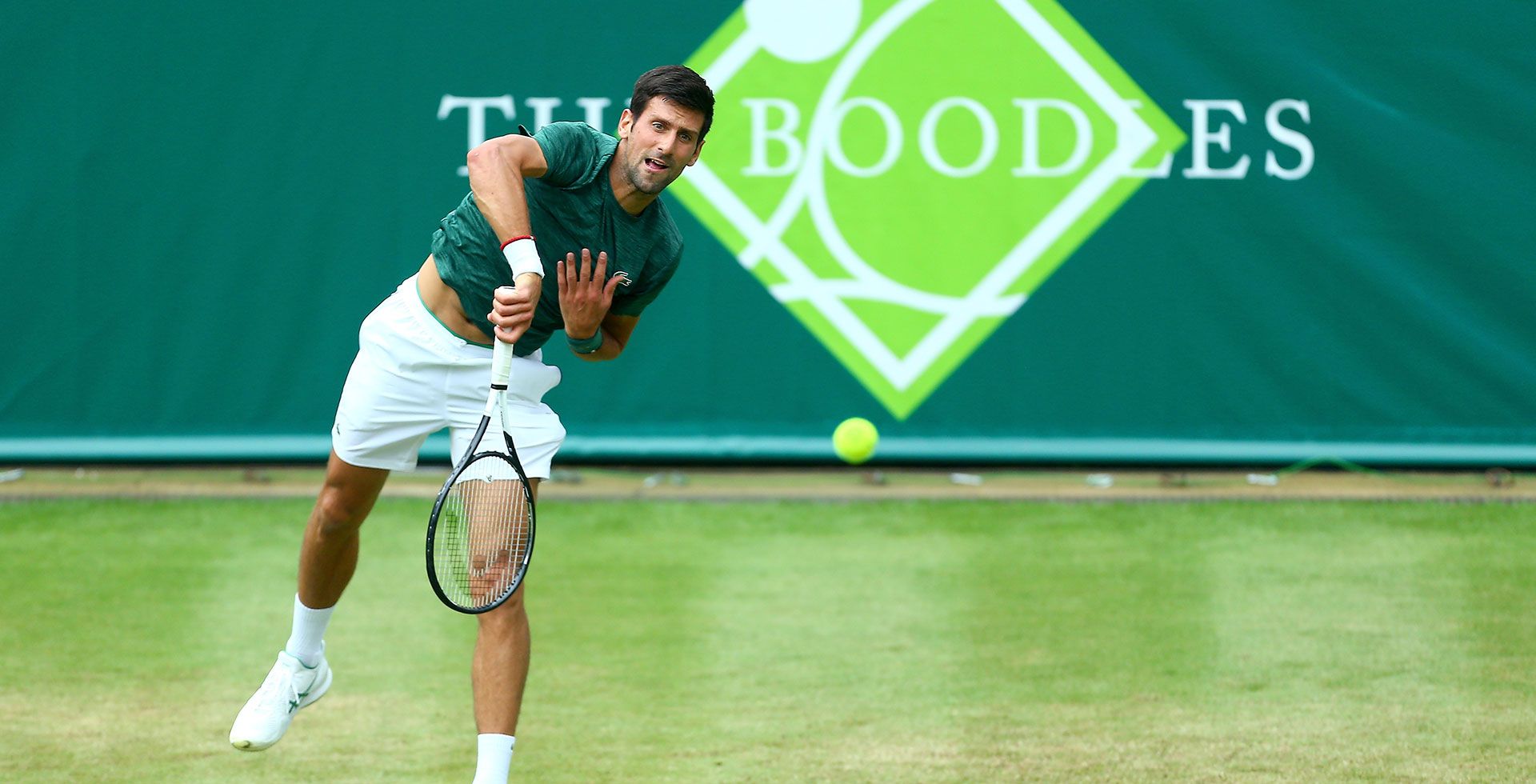 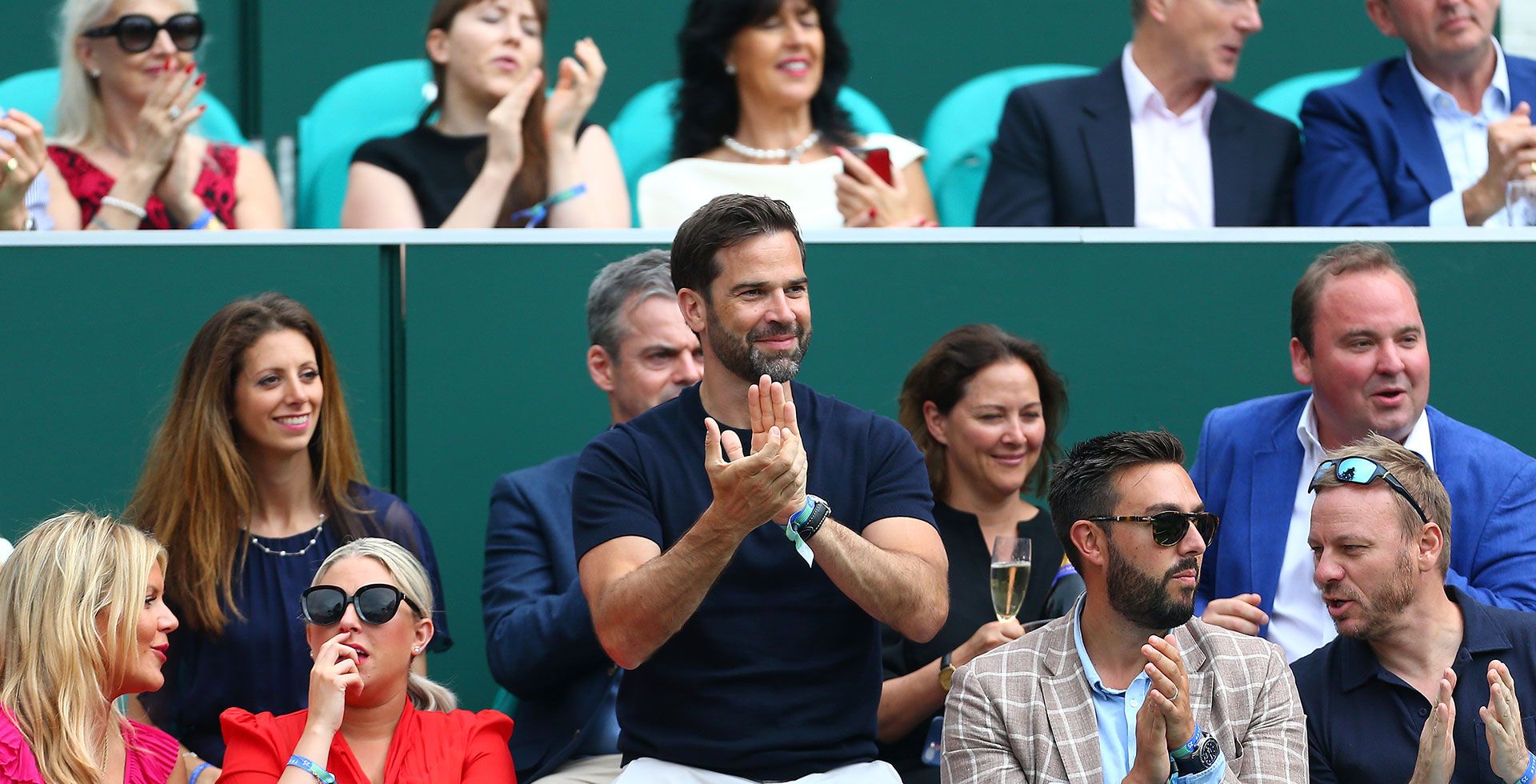 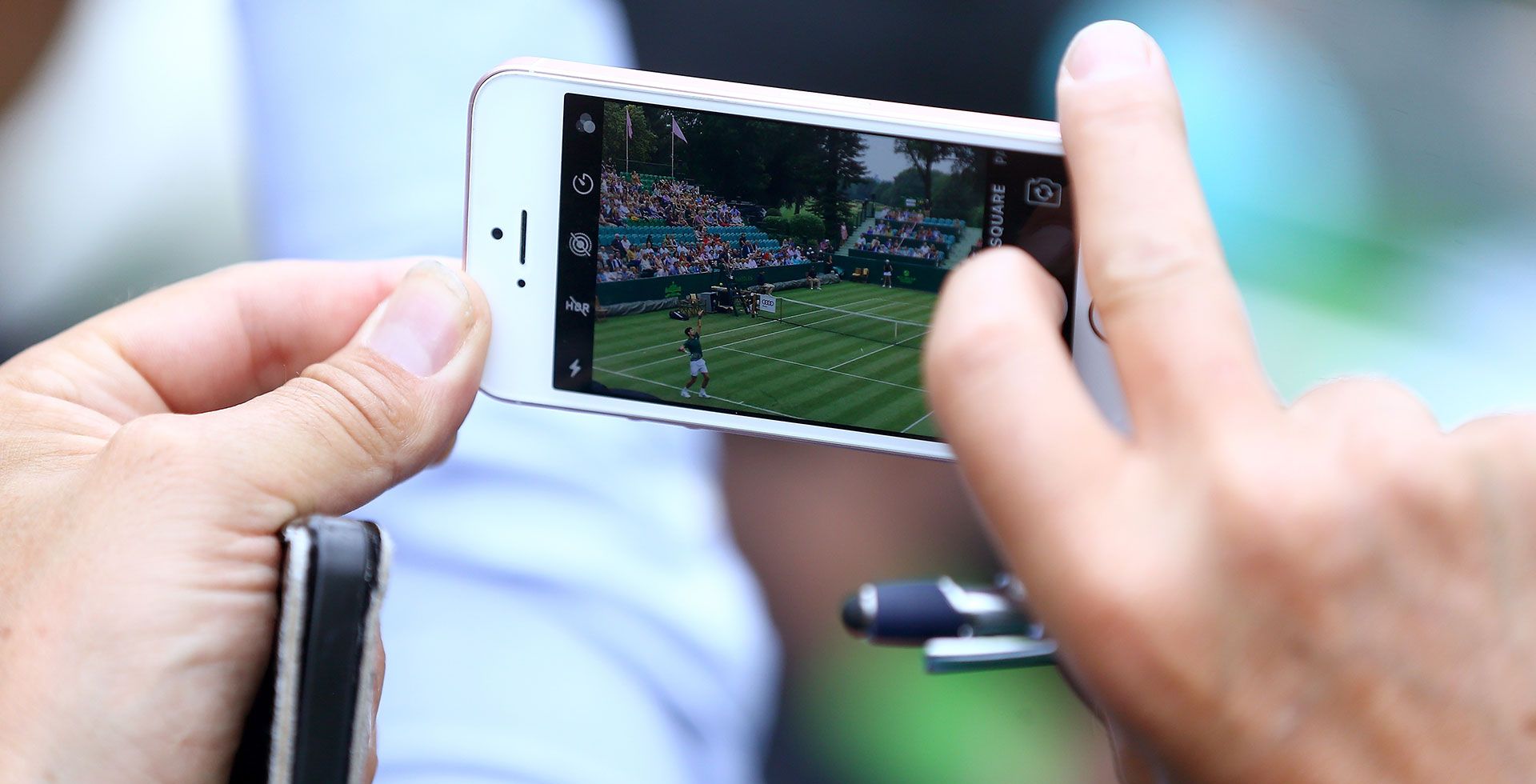 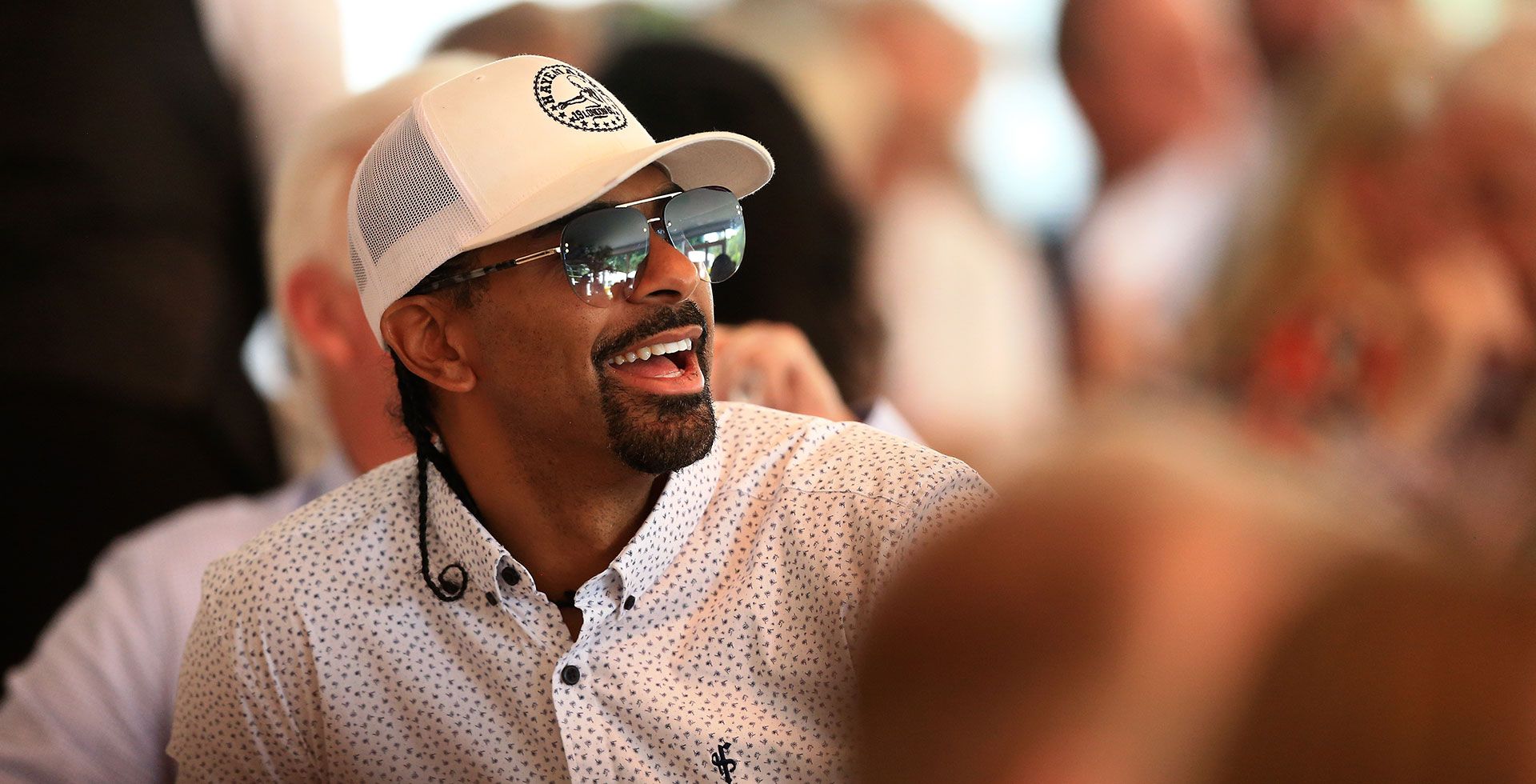 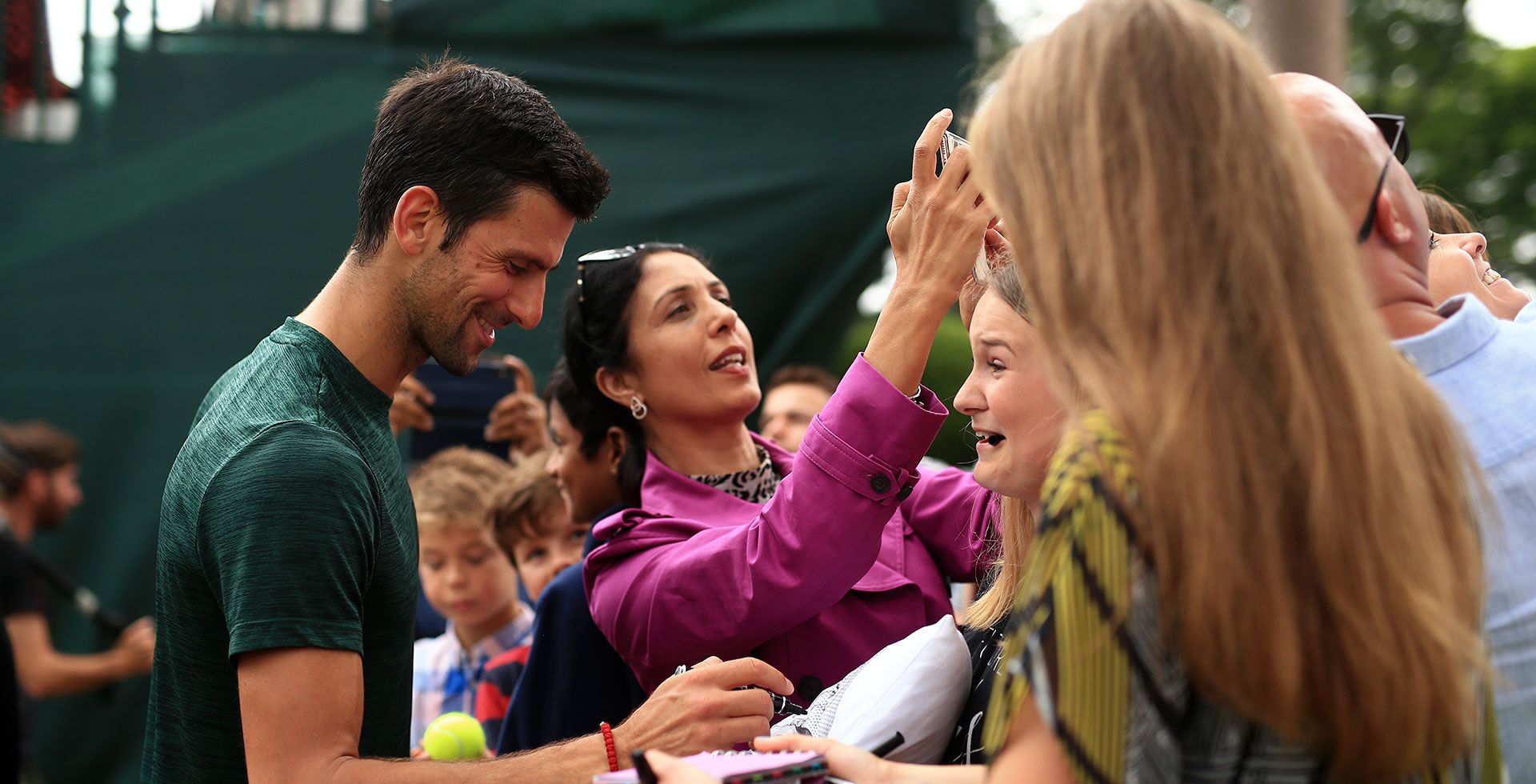 World No.1 Novak Djokovic headlined a stunning day of action at Stoke Park as The Boodles returned for 2019. The defending Wimbledon champion was joined by talents such as ATP Next Gen star Denis Shapovalov and World No.10 Fabio Fognini as some of the ATP's biggest names put on a show for the crowds.

Djokovic served big and controlled the rallies to race out of the blocks in his first meeting with 23-year-old Garin. The young Chilean found his feet in the second set, firing some fierce forehand winners to secure a break of serve at 4-2. But the 15-time Grand Slam champion upped the ante from there, playing his part in flashy rallies and ultimately producing tennis too consistent for his opponent to match.

The Serb was back at The Boodles for the first time since 2016, and looked as though he had never left.

“It's a great environment, a great tournament,” he enthused post-match. “I've been playing here since 2007 and I'm good friends with Patricio, the man in charge of organisation for this event. It's a light-hearted environment – a fun and engaging and interactive atmosphere, and people love their tennis, love showing up and having fun. And lovely smiles in the crowd.”

The World No.1 complimented the relaxed nature of the event.

“It's good preparation, good quality opponents, but at the same time... it moves you away from the stressful, sort of pressurised moments [while you're preparing] for one of the biggest tournaments in the world,” he explained.

Djokovic heads into The Championships next week as the defending champion, and he reflected on the changes between his position this time last year and the present.

“Coming off from surgery and dropping out of the top 20 to win Wimbledon was a huge turning point for me last year,” he shared. “It meant a lot to my confidence and just the quality of my tennis. Things change, you know, when you win a Grand Slam. Regardless of your ranking, it just affects your whole life and your confidence and the way you feel on the court. So that meant a lot, and since then it was all upwards for me in the last twelve months.”

He added: “I've been blessed to be No.1 and win three out of four Slams. I'm in form, I'm playing really good tennis. I feel really natural on the grass, and I look forward to participating in Wimbledon. It is – for me, and probably many players – the greatest and most important tournament in the world.”

Garin – who has won two ATP titles this year – was delighted with the opportunity to face such an accomplished opponent.

“It was a great match for me,” he reflected. “[Even though] it wasn't [an ATP] match, I tried to play at 100%. Obviously, Nole is a great player and it's good preparation for me, to play against the No.1 in the world.”

“It's always a pleasure to play against someone like Nole and it's a dream to be here.”

Of Wimbledon – for which he qualified last year – he shared: “Wimbledon is my favourite tournament by far, and I love to play on grass. I played two tournaments before this week [on grass], now I've played here... so I hope to play better than I did last year!”

Popular Canadian Denis Shapovalov returned to The Boodles for the first time since 2017 to record a straight sets defeat over Fognini, producing top drawer tennis to take the lead and maintain it.“It's definitely great to be back,” the World No. 27 said after the win. “I've got a little bit more experience on tour coming here this time. And it's just a great week at The Boodles, a week before the Grand Slam, to take it easy, play some matches against great players and just enjoy my time.”

The 20-year-old – who is up against Novak Djokovic in a much-anticipated clash on Wednesday – was thrilled with his first performance of 2019 at Stoke Park.

“Honestly I was just feeling it from the start,” he assessed of his win. “To be honest I just started slapping every ball, it seemed like everything was going in today!”

Fabio Fognini – who beat Rafael Nadal on his way to the Monte-Carlo Masters title earlier this year – is looking to find some form on grass after a successful clay-court season.

“The transition is normal, we all have to do it,” the Italian said. “I haven't played on grass for a year apart from Wimbledon, so let's see [how things go].

He added: “I've no expectations for Wimbledon. I have to prepare myself as well as I can. I have one week before me, so I'm relaxed, trying to prepare well and do 100%.”

In a clash of two players with little grass-court experience, 29-year-old Klizan came from behind to claim the upset over World No.24 Schwartzman – the higher-ranked Argentine having come a few points away from victory.

“It's always good if you can practice or play a match with one of the top guys on tour, so it was a great match and it was also great practice,” Klizan said of his narrow triumph.

Of his maiden appearance at The Boodles, he commented: “It's great because you can play on the grass all day, and at other clubs you can't because there are so many players. Here there's always a court available, and you're sparring all the time with good players.

Schwartzman will have another shot at victory on Wednesday, when he returns to Stoke Park tomorrow to face Fognini.

“It's really nice to be here – it's my first time so I'm enjoying it, and I think it's really good preparation for Wimbledon, playing against the best guys on tour,” he shared.

The 26-year-old also talked of his lack of grass-court experience.

“It's more difficult for the South American players, I think, because we don't have grass-courts in Argentina,” he shared. “And now it's Winter, so it's really cold, and we don't have many weeks to get preparation. So I decided to... be here in Europe more days and try to be ready for Wimbledon this year.”